The Flight of Dragons – Review

You’d be forgiven for thinking that dragon movies come in two flavors, dragon anime or the How to Train Your Dragon series. But fantasy films have always captivated audiences of all ages.

Whether they’re live-action or animated, they’re entertaining and enjoyable to watch due to incorporating elements of magic, mythology, folklore, or supernatural occurrences. The earliest fantasy films go all the way back to silent movies in the early twentieth century and they have continued to develop ever since.

One of the classics in the world of fantasy films is the 1982 animated flick The Flight of Dragons.

What is it about?

The Flight of Dragons is based on the book of the same name by Peter Dickinson, a 1979 speculative evolution book. And The Dragon and the George by Gordon R. Dickson.

Released the same year as the Dungeons and Dragons cartoon was first aired, It poses the question of whether we should live in a world of magic. Or should we live in one solely based on science and logical thinking, or can both elements coexist?

The movie takes place in the medieval realm of magic that’s populated by mythical creatures and is being threatened by the realm of logic. Carolinus, the green wizard, notices that magic is fading from the world as people begin to embrace logic and science with every passing day. In an effort to protect the realm of magic for all time, he decides to shield it, but Ommedon, the evil red wizard, decides to spread fear and greed among humans causing them to use science to destroy themselves.

The main character in the film is named after the author Peter Dickinson himself. So, Peter, a former scientist, is called upon by Carolinus to go on a quest as the first man to belong to both the realms of science and magic. It’s Peter’s job to defeat Ommedon.

Throughout his quest, he’s joined by the talking wolf Aragh and Carolinus’ elder dragon companion, Smrgol.

If you click the button and purchase this item, we will receive a commission, at no additional cost to you.

Although the film was released directly to video in August 1982 and then released in theaters in 1986 and on DVD in 2009, it continues to receive fairly positive reviews to this day.

Filmsy.com said, “Animated fantasy films geared for family viewing just aren’t made like this anymore…The voice acting in this movie is excellent, to say the least…Though the animation might seem a bit ‘dated’, it remains beautiful by 1982 standards.”

According to the site, the animation was created by Japan’s Topcraft Studios, one of the finest animation studios at the time. Their work on the film was largely inspired by the illustrations in the Peter Dickinson book.

“The dialogue is surprisingly intelligent and may confuse some children but it is nice to see an animated film that will stimulate adult minds a little…The voice cast are all great and I can’t find a single fault with any of them,” said blogcritic.org.

One critic on Rotten Tomatoes described it as “Imaginative fantasy pits science against magic.”

An overused plot or ingenious tale?

One complaint audiences seem to have is that it’s maybe a bit too clichéd and predictable with no real twists and turns in the plot. However, it still makes sense since it primarily targeted a family audience, which includes children.

Despite all that, the plot is far from being simplistic. In terms of the theme of magic vs. science, the movie cleverly employs Peter’s scientific background to try to make sense of how dragons function. It also stresses on the sorrow of forgoing the fantasies of youth and delving deeper into the world of science.

Little did they know that a couple of decades later, the world would be captivated by mythical dragons courtesy of the HBO drama series Game of Thrones. Let’s not forget other pop culture phenomena that also featured the mythical creatures, such as Harry Potter (see our guide to Harry Potter dragons), Eragon, How To Train Your Dragon, The Hobbit: The Desolation of Smaug, and Pete’s Dragon. These legendary creatures continue to enthrall people since they were first included in folkloric tales in ancient times.

The movie may come at a disadvantage when compared to Disney productions for example, but we have to take into consideration that the story has more serious connotations than the traditional fairy tales presented by Disney.

Still, it packs a lot of adventure, fantasy, and romance to satisfy viewers for years to come.

With so many live-action remakes of animated films happening recently, The Flight of Dragons also did not escape the notice of Hollywood execs. In 2012, an attempt at a revival was planned out, but it was unfortunately canceled soon after.

Maybe this film is meant to remain as a classic of animated fiction and perhaps that’s for the best.

The film upholds a strong rating of 92% on Rotten Tomatoes according to audiences and a 7.8 out of 10 on IMDB. The film is available on Amazon and iTunes.

If you click the button and purchase this item, we will receive a commission, at no additional cost to you.

The Flight of Dragons Cast

The film features the voices of Victor Buono as Aragh, James Gregory as Smrgol and Bryagh, James Earl Jones as Ommadon, Harry Morgan as Carolinus, John Ritter as Peter Dickinson.

The Flight of Dragons was the first theatrically released animated film for James Earl Jones who went on to voice the unforgettable character of Mufasa in The Lion King (1994).

The Flight of Dragons

All in all, the film provides an enjoyable viewing experience for the entire family and it may inspire your children's love of fantasy films.

The Mummy: Tomb of the Dragon Emperor – 11 Things You Didn’t Know 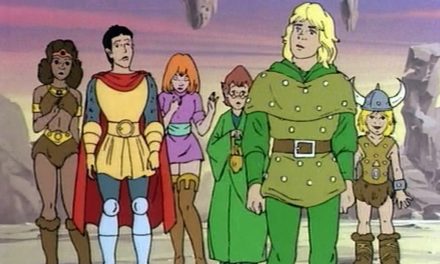